I have been working with Amplifi tech support to diagnose some dropout issues for some time now. One of the things I was concerned about was a wireless HDMI repeater a few feet away. (Spoiler alert: the repeater had no impact, powering it completely off had no change on the issue.)

But, to help isolate the router for troubleshooting, I tried to isolate the router and at one point folded up a piece of aluminum foil and laid it on top of the router. It extends out over the back, folded down slightly; the router is located in a cabinet under the TV, about 24″ off the floor: 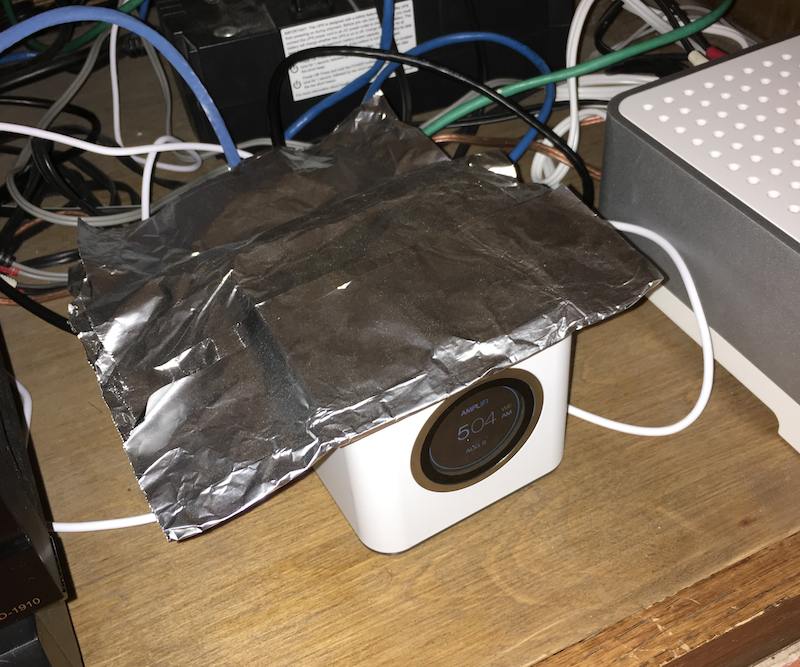 The interesting byproduct of this experiment was performance. Normally I was getting iperf3 performance in the 200-300Mb/s range. As soon as I put the “tinfoil hat” on the router that jumped to 300-400Mb/s. Take it off, performance drops, put it back on performance jumps.

This is probably because the antennas are multi-directional and this is pushing all of the broadcasting to the front, but regardless, I saw ~30% uptick in wireless bandwidth.

The difference between having the foil on and off in terms of connected rate and signal strength was almost identical. In both cases I am connecting with ~85% strength at ~867Mb/s. The strength went from -41dBm (off) to -47 dBm (on). The noise was almost identical between the two modes as one would expect.

An interesting experiment with a free boost.