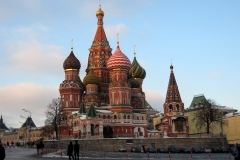 I have been to Moscow three times, twice (stupidly) in the winter, and once in the summer. The city is an incredible sight, home of the world’s worst traffic (maybe a close second to Beijing on a bad day) and chilling temperatures. The food is incredible, especially if you like German/Eastern European cuisine.

The Moscow metro is one of the more interesting art galleries that I have seen. During the communist rule there was not as much art for art’s sake, so it all ended up in the metro stops. Each one is unique in its own right. Additionally, it is incredibly efficient with trains arriving almost minutes apart – the volume and traffic is staggering.